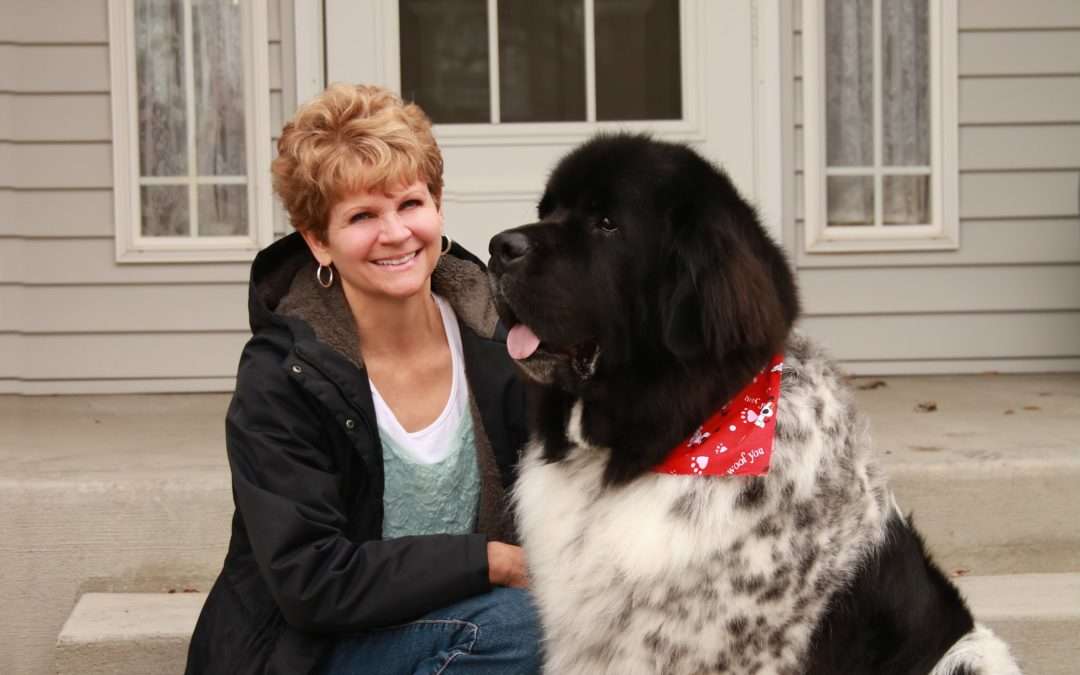 A first look can be intimidating and their enormous chest will sound quite the woof!

My first Newfie one-on-one was with St. John’s father, Bruce. After years of terrier experiences, I could not believe the 7-month-old would lie down and stay calmly on the kitchen floor while we were there working. I was intrigued! I had no experience with a large, much less giant, dog. I believe I can trace my first love for the breed right back to that moment, when I met Bruce.

A few years later, Sonya told me she had a Landseer male very much like Bruce, his father. We debated whether we could accommodate the sheer full grown size of a male Newfoundland dog. It ended up to be a non-issue.

St. John (nickname “Senjy”) came to us on a June afternoon, about 11 weeks old and freshly bathed. His white tail happily waved up high as he pranced around the yard after me. Even after he started to slow down in his sixth year, he remained a playful dog, wanting to race around the yard or jump into the air to catch a snowball. His favorite place to be was with us, but sometimes in the winter he would have to go outside to lay in the snow; and in the summer, go in on the tile floor in front of the air conditioning vent.

He knew no enemy and avoided contention. Were we to raise our voices or even have a coughing fit, he would cast us a glance and head out the dog door. While he loved all people and other dogs, he had a special rapport with children, and they with him. For years he visited an elementary school reading program, an alternative high school, and was a middle school library mascot where he also visited special ed classes. He visited a nursing home and assisted living facility for a number of years as well. He made some very sweet friendships.

Senjy was often recognized around our small city when he went on errands with me and was greatly admired almost without exception for his magnificent looks and humble, patient, and kind demeanor. Needless to say, I absolutely loved sharing him with others.

Quite unexpectedly his life was cut short by cancer and we lost him with only two months warning, just before his seventh birthday. While I have always loved my dogs, his loss has been the greatest, and not just because of the size of his frame! Maybe it’s a terrier’s independence that I was used to, but to have a happy, proud, gentle, dog that loved you and didn’t have to do anything against his will, because he gave his will up to you, was unlike anything I’ve experienced.

I think it is interesting that “dog” and “God” have the same letters… most dogs give us a form of unconditional love. Newfies give 100% of their heart and soul to you. And they, perhaps more than most any other, give us a true example of that pure love God has for each one of us.