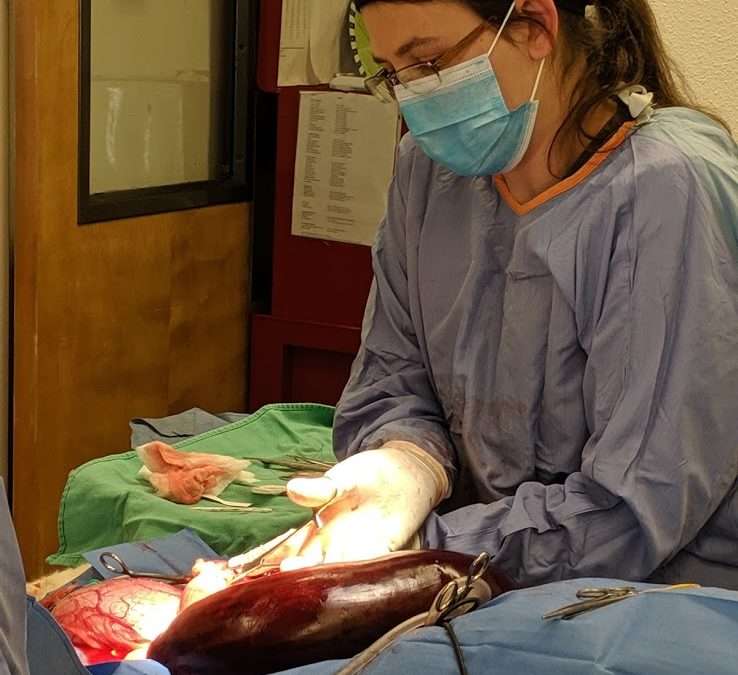 On July 13, 2019, Bailey went into labor and had one female puppy (Lindy Rae). After several hours of not producing anymore puppies I took Bailey into Dr. Calhoun. They spent several hours trying to help her labor along but with no results. They did a C-Section and opened Bailey up to find that her uterus had twisted and had begun to deteriorate. They had to do an emergency spay during a c-section. Spaying during pregnancy is very high risk surgery, due to the risk of bleeding to death because the veins are greatly enlarged because of the pregnancy. They spayed her and tied everything off and then were able to open up the uterus to get the two big male puppies out which were deceased  because of the twisting of the uterus. A twisted uterus is a rare thing, Dr. Calhoun said in all his years, he’s only seen 5 of them. I included a picture of the c-section, the eggplant color organ is the uterus, it should have been a light pink color. Bailey is doing well and raised Lindy Rae and is a healthy happy puppy.

On September 16, 2019 Our dear sweet Ray passed away.  He bloated. The weather circumstances that day and his activities all came together to produce bloating. By the time he was taken to the Vet they could do nothing for him and he quickly passed on. We will greatly miss him and his beauty. That’s why Bailey’s last puppy was named after her dad, “Lindy Rae” to honor him. We had his semen collected and stored a few years ago, so at some point we will have more “Ray puppies”. He was almost 8 years old,  he was born on Halloween, thus “Black Raven”.